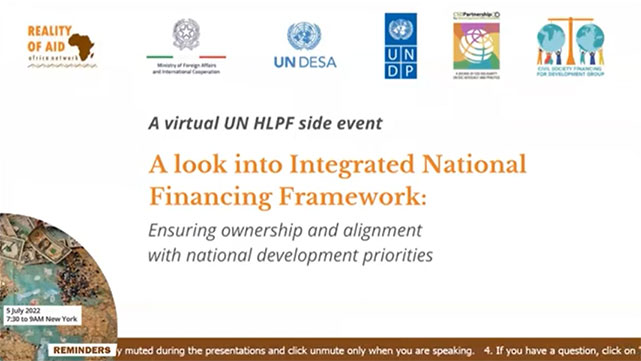 Through a virtual side event during the UN High-Level Political Forum (UN HLPF) in New York titled A look into Integrated National Financing Frameworks (INFFs): Ensuring ownership and alignment with national development priorities, CPDE and its partners facilitated a conversation around how the framework can truly help bring sustainable development.

Held last July 5, the activity was organised together with the Reality of Aid Africa, Ministry of Foreign Affairs and Development Cooperation, Italy, UNDESA, UNDP, and the Civil Society Financing for Development (FfD) Group.

According to the organisers, the international community has been steadily investing in the development of INFFs since the Addis Ababa Action Agenda stated their relevance. Notably, the G20 endorsed a voluntary framework in this regard.

Today, INFFs are being promoted by development partners and multilaterals; partner countries are implementing these frameworks on some level; and civil society organisations are trying to better understand potentials and risks, in order to assess the impact on the Financing for Development (FfD) global agenda, the actual space for country ownership and the participation of civil society.

Facilitated by Stefano Prato, Executive Director of the Society for International Development (SID), the event featured presentations and discussions on the overview of INFFs and its approach, survey, and facility by the UN DESA and UNDP, civil society views on the Review of Guidance Material by the CSO FfD Group/CPDE, the INFF G20 framework, implementing country government national experience, and national CSO perspectives on INFF implementation.

Overview of the INFFs and its approach

In her introduction to the INFFs, Shari Spiegel, Chief, Policy Analysis and Development Branch at FSDO/DESA argued that countries are responsible for their own development, and the international community is responsible for their enabling environment. At the same time, she explains that “while the INFF is potentially a powerful tool, one should not expect too much from it.”

The INFFs, she explained, are a framework to raise financing needs at the national level and to strengthen coherence among policies and actors, and a knowledge and experience sharing platform for implementing countries. These are tools aiming at strengthening the SDGs and existing systems, not to add to, nor to replace them. She also stressed that the purpose of the process is to bring everyone to talk, but that this will not solve existing country governance problems.

Thomas Beloe, Chief of Programme, UNDP Sustainable Finance Hub, described the INFFs as a country-led “work in progress” and insisted that at its core  is an emphasis on broadening the constituencies that engage on finance policy. This is why, he says, the UN strongly encourages the participation and significant contribution of civil society.

Among 86 countries implementing INFFs worldwide, only 28% of national oversight committees count civil society as members. He stressed that “we could do more and should do more to engage different constituencies at every stage of the INFF process.”

For her part, Polly Meeks, an independent researcher for the Civil Society Financing for Development (CS FfD) Group, presented the findings of a review on the INFF guidance material. She started by saying financing issues faced by the Global South countries are systemic, and outside their unique control. The review thus recommends expediting action on systemic global economic governance issues and not to present INFFs as the sole solution.

The review also insists on the full participation of rights holders in all INFF decision-making, as well as giving countries free choice on implementing the INFFs. The paper also recommends that policy reforms being pushed forward within the INFF processes should acknowledge risks, uphold obligations, and value alternatives. For example, economic growth is assumed as a common objective for all countries, but must be reconsidered given the current global threats and climate crisis. The IPCC report for instance recommended a pattern of degrowth for Global North countries.

Meeks also urged taking into account existing researches on the risks associated with some of the INFF tools, and featuring them more prominently on the guidance materials, along with a more diverse range of possible tools and approaches as alternatives. Finally, she pointed out the importance of emphasising the countries’ binding obligations under UN treaties, especially regarding human rights.

Overview of the process and development of the INFF G20 Framework

Min. Marco Ricci, Chair of the G20 Development Working Group under the Italian Presidency, meanwhile provided an overview of the process and development of the INFF G20 Framework developed over the past two years, explaining its aim to try to cope with the crises of 2020.

He talked about the adoption of the extension of the debt suspension initiative given to 50 lower income countries, and of a common framework – an ambitious instrument aiming to gather all donors, including private donors, around 80 high-debt countries for more structured intervention to make debt sustainable. “We believe that the only way forward is for all creditors to be involved,” he said. They also promoted the adoption of a global minimum tax, seen as the first step towards a global tax.

Italy organised a development ministers’ meeting at the end of June 2021 to discuss INFFs, which led to the later adoption by the G20 DWG of the G20 Framework for voluntary support to a greater uptake and operationalisation of the INFFs for SDG financing and Covid-19 recovery in developing countries. This framework was then adopted by G20 leaders at the Rome summit last October 2021.

Next presenters were CSO speakers Vitalice Meja, Director of Reality of Aid – Africa and Non-Executive Co-Chair of the GPEDC to reflect on Kenya perspective, and Rodolfo Lahoy Jr, Policy, Communications and Training Team Head at IBON International, for the Philippine experience.

Meja said that in Kenya, where INFF is still in development, the process led by government is becoming more inclusive, with the technical steering group including civil society, local authority, and foundations. But he acknowledges that more work needs to be done towards comprehensive ownership, and insisted on the importance to train people locally to develop and implement such processes, instead of relying on external consultants for reports that will only be reviewed later by local actors. He also reiterated the importance of bringing all stakeholders to the table from design to inception to implementation and review. He argued that everyone should engage on the terms of reference, agree on the key questions and areas that need to be looked at, and that the INFF should not only be a government tool that nobody really uses.

He does note that, as of now, this process is solely undertaken by the national Ministry of Finance. And because sustainable development is not only about finance, there is a need for more coherence and various perspectives, hence the involvement of other ministries and civil society actors. He also asked, “What is the added value for this process, especially at the national level? Is there really a demand for this or is this supply-driven?”

He stressed that development partners still play a very big role in setting the direction of development funding in developing countries. He then invites everyone to ask the kind of behavior change we need, want, and expect out of this exercise, especially from development partners: “It is not enough to say that you have a tool to be able to track, to be able to see, but how does that tool lead into a behavior chance that is necessary to generate sufficient resources to finance SDGs?”

Finally, Rodolfo Lahoy Policy, Communications, and Training Team lead of IBON International, then provided CSO perspectives on the INFF in the Philippines. After an overview of the Philippine INFF launched September 2021, its human capital approach (investing in health, education, and gender equity for long term economic growth), systems and stakeholders, Lahoy raised some questions on both democratic ownership and Philippines systemic issues in the context of implementing the INFF.

Regarding the democratic ownership, he laments that the process has not been sufficiently democratic as organisations of the marginalised, such as domestic trade unions, organisations, and urban and rural poor movement, were not influential or even present, across the process. He also warned that INFF process works from uneven terrain of big private sectors vis a vis civil society.

Lahoy asked how the INFF, in aligning with existing country policy priorities, would account for existing structural issues regarding development financing. Among them are the current tax regime being heavy on consumers while investment on special economic zones (SEZ) rely on corporate incentives, the country being highly indebted, and one of the top borrowers from the World Bank, its trade economy being export-oriented, and broadly relying on remittances and Foreign Direct Investments (FDIs) without strong industrial capacity.

He warned that the INFF process might reinforce risky approaches about private finance, and whether the INFF – amid pandemic, multiple crises, unequal recovery – will actually offer a window for more ambitious, systemic policy shifts. All these elements of national context and policies, he said, must lead us to ask how they will contribute towards sustainable development.

The event ended with an open plenary where civil society actors were given the chance to ask questions to the panelists.

The full event recording is available here, and below.