A call for international solidarity to support the Afghan people’s quest for justice, peace and development

On August 15, 2021, the world witnessed devastating developments in the ongoing civil war in Afghanistan. Taliban forces have recaptured Afghanistan’s seat of power after the withdrawal of the United States forces, which marks the ‘end’ of its decades-long occupation. As a result, thousands of Afghans rushed to flee the country, while others have sought refuge in neighbouring countries like Pakistan and Iran. The untold costs will be laid bare in the decades to come.

History of conflict and instability

The US and its Western allies invaded the country after the 9/11 attacks on the pretext of a war on terror and aggression. Following the war, the US installed a transition government and introduced its notions of ‘democracy’ to an otherwise deeply conservative society. Since then, millions in official development assistance (ODA) have poured into the country to support its reconstruction and nation-building. However, much of this ODA was used for militarism by the transition government and its allies, instead of addressing poverty and exclusion aggravated by the ongoing war. The US alone reportedly spent US$2 trillion in Afghanistan, mainly for its military campaign in the region. 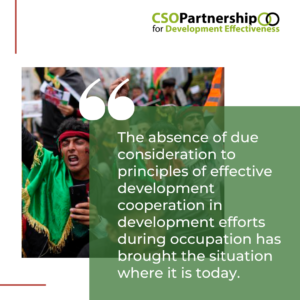 Today, Afghanistan ranks 169th out of 189 countries and territories on the UN Human Development Index, and is one of the world’s top producers of opium. Almost half of the Afghan population live below the poverty line (Asian Development Bank, 2020), while foreign contractors ferried oil from the country, officials pocketed government funds, and local warlords presided over the growing opium trade. At this juncture, the increasing costs of militarism and war have forced the US to enter into a peace agreement with the Taliban. However, the haphazard implementation put millions of Afghans – especially the women and girls – at risk.

Afghanistan’s experience shows the continuing folly of promoting development that is not anchored on just peace and people’s rights and aspirations. The absence of due consideration to principles of effective development cooperation: democratic ownership built on the people’s will and interests, transparency, accountability, and shared responsibility, inclusive partnership for development, and a focus on results, in development efforts during occupation has brought the situation where it is today. 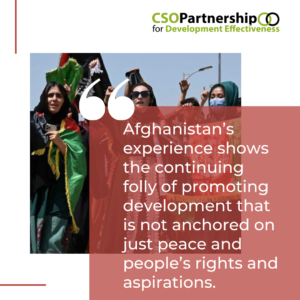 The people of Afghanistan need international solidarity. The international community, including all development actors, must mobilise resources and enable mechanisms in support of the Afghan people suffering from this humanitarian crisis.

CPDE welcomes the United Nations Secretary-General’s call for all States not to abandon the Afghan people and to use all means within the bounds of international human rights norms and standards to stop the atrocities. We call on the UN and all States to guarantee the rights of all Afghan citizens.

We demand accountability from the US and urge other States, particularly those who took part in this occupation, to take reparative measures as a matter of moral responsibility. This should include the opening of their borders to the vulnerable people of Afghanistan seeking sanctuary. Concretely, we recommend swift changes on immigration programmes to accommodate all refugees left vulnerable by this development. 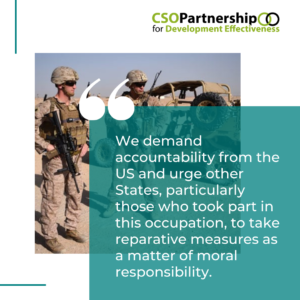 We also call on States to provide humanitarian assistance guided by the principles of solidarity, non-conditionality, and international protection aligned with human rights frameworks. Support should be directed towards the people’s needs – not geopolitical interests – and respond to the nexus of humanitarian aid, peace, and development. In the same vein, we call for the ramping up of funding to Afghan civil society organisations focusing on peace and humanitarian initiatives, and for a cessation of military aid that fuels war in conflict-affected areas.

The Taliban-led government should abide by their commitment to upholding Afghanistan’s international human rights treaty obligations and allow the United Nations and independent international observers into the country to monitor and promote the protection of human rights.

Finally, we express solidarity with the people of Afghanistan aspiring for just peace and democracy, gender equality, and self-determination. We are one with the members of Afghan civil society in the struggle for recognition as independent development actors, and respect for human rights. We join them in demanding civic space to perform their societal roles and in calling for the protection of civilians, especially women and girls, ethnic minorities, and journalists, from violence and other harm. 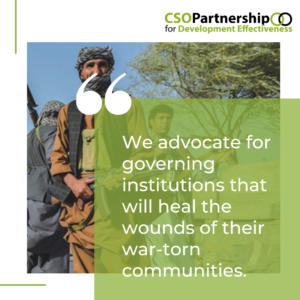 Promoting peace and security in Afghanistan is the responsibility of all stakeholders. With the rest of the world, we stand for social justice and genuine reconciliation in Afghanistan. We advocate for governing institutions that will heal the wounds of their war-torn communities. May the roots of the conflict be addressed, and may they find lasting peace and progress. #