The Global People’s Assembly is a self-organised space during the United Nations General Assembly high-level week. It aims to bring the voices of the people to the forefront, at a time when decision-makers engage in high-level debate without people’s involvement.

The one hour- session aimed at showcasing the most recent trends as relates to civic space, enabling environment, and Covid-19 impacts, and to discuss why global discourse on the importance of civil society is at stark odds with realities at home, and suggest a possible approach of building trust towards meeting a common sustainable development agenda.

Julieta Zubrigg and Ines Pousadela, senior researchers from CIVICUS were first to present on CIVICUS’ initiatives to monitor the state of civil society, civic space, and enabling environment around the world.

Zubrigg started by presenting the key trends on Civic Space in last year’s CIVICUS Monitor, CIVICUS’ global attempt to describe the current realities of civic spaces around the world. The report aims to share reliable information on the state of civic space, civic freedoms (freedoms of assembly, association, expression), by rating every country in 5 categories from open to closed civic space. In 2021, almost 90% of the world’s population lived in countries where civil society freedoms are compromised (obstructed, repressed, closed), and 25% in a completely closed civic space.

Over the past year, they observed a downgrading of civic space rating in many countries around the world. This translated in violations such as detention of protesters (90 countries in 2021), intimidation, harassment, HRDs detained, restrictive laws, journalists detained, excessive force (70 countries), attacks on journalists, censorship, protest disruption.

Among these violations, restrictive laws were observed to be on the rise in 2021 compared to the previous year – a result of governments using the pandemic to implement additional legal restrictions on civic freedoms. 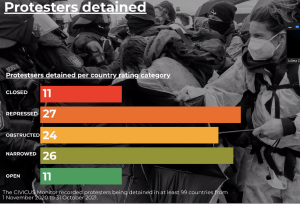 Overall, the trend of shrinking civic space that has been observed and monitored for years is continuing if not worsening due to the multiple crisis the world is facing.

Despite growing restrictions, civil society has found ways to speak up and claim their rights. Pousadela from CIVICUS then presented 5 major trends affecting civic space and civil society in 2022, and how people responded to it: 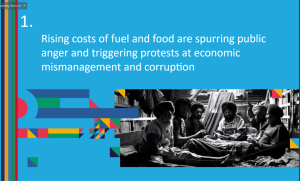 She noted that protests have been happening everywhere, even in very authoritarian and repressive contexts such as in India or in Sri Lanka. 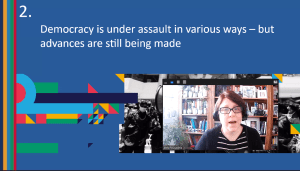 Attacks against democracy and democratic regressions have been observed through military coups, new authoritarian regimes, democracy subverted from within by elected and popular leaders who rewrite constitutions, and anti-rights groups gaining grounds. She said that even though the overall picture is dark, civil society can still find reasons for hope as democracy has been deepening in some countries such as Chile or Honduras. 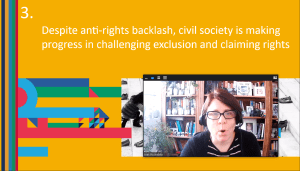 It has been observed that neoconservative and very well-funded groups are denying rights to women, LGBTQI people, migrants, and refugees. Anti-right forces are indeed on the rise but 2021 also witnessed some civil society victories. Even though the case of the US occupied the headlines, there are many more countries in the world that have made progress on claiming women’s rights, LGBTQI rights, and reproductive health, than countries where we have seen regression, and this is thanks to civil society action. 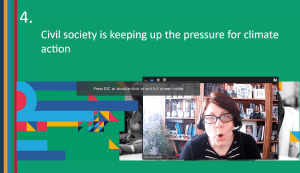 After the climate mobilisations of 2019, movements expected 2020 to be the year of climate action but it turned out to be the year of the pandemic. Civil society is working to make this happen now, with a lot of expectations into COP27. Civil society has been urging political leaders to listen to scientists, and diversified its tactics, in part due to the pandemic. Pousadela noted that we are already starting to see some victories in climate litigation, and accountability of private sector and states. 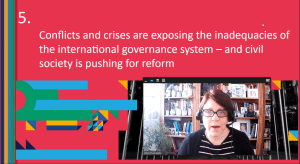 You may access more detailed information about CIVICUS researches on civic space in CIVICUS 2022 State of Civil Society Report.

Charles Gay, Global Program Advisor on Governance and Rights of Christian Aid was next to report on their organisation’s 2021 study “How Covid Shrank Civic Space,” which analyses the effects of the Covid-19 pandemic on civic space, with a focus through primary data from Bangladesh and Nigeria, and case studies of specific effects on Zimbabwe, Myanmar, Israel and the Occupied Palestinian Territory, the UK and Colombia. 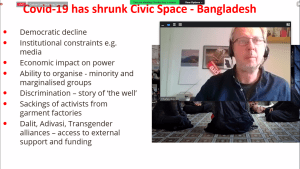 The study also presents alternative ways of organising for civil society, as well as recommendations to protect and expand civic space. Just like CPDE’s Covid research, Christian Aid’s research highlights “many States used the pandemic to restrict civic space and liberties such as freedom of speech and assembly,” and “a sharp increase in governments’ surveillance.” Christian Aid also observed a significant shift towards the private sector becoming close allies to the government and providing support or receiving funding. Meanwhile, freedom of assembly and activism have been curtailed through oppressive regulations. 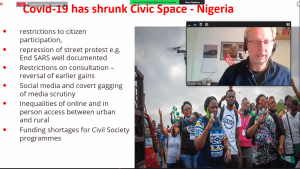 Civic space restrictions have been exacerbated by increasing operational risk: in a number of countries with governments hostile to civic space, registration has become increasingly problematic and civil society organisations are more vulnerable to government actions. “The study highlights a lack of meaningful engagement and recognition of CSO role in development, and a lack of transparency from governments”, said Gay.

Alternative organising offers a partial solution: the move to online civic space has brought new opportunities for certain groups and increase in audience. Yet it has also brought new inequalities of access and participation for those who are digitally excluded. This was also one of the findings of CPDE Covid-19 research.

Josefina Villegas, CPDE Membership and Policy Coordinator, was next to present the results of CPDE 2022 VNR Study: Challenge the ways of old: CSO demands for urgent and extraordinary actions in Effective Development Co-operation towards pandemic recovery. 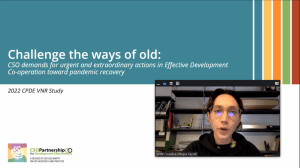 The annual CPDE Voluntary National Review (VNR) Study was published last July 2022, in time for the UNHLPF in New York. It aims to bring CSO perspectives on how the VNR processes are being conducted at country level, and give insight on the effectiveness of said processes.

She highlighted the lack of meaningful engagement and recognition of CSO role in development that was also mentioned by Charles Gay, and deplored that the progress on all Istanbul principles (country ownership, inclusive partnership, transparency and accountability, focus on results) have either remain stagnant or have declined.

In this context, CPDE calls for extraordinary action aligned with EDC toward possible pandemic recovery. Villegas insisted that EDC should be seen both as a framework enjoining all development actors, especially duty-bearers, into honoring their commitments, and also as an approach to development which strengthens multilateralism that actually responds to issues on the ground. 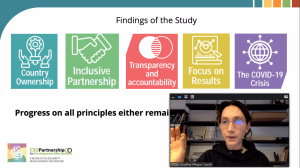 She concluded with the main recommendations of the study: the need for governments to accelerate cascading of the SDGs from the national to the local level; to mainstream the inclusion and significant participation of civil society, especially from the marginalised sectors, to the 2030 Agenda implementation; to unlock barriers to transparency of the 2030 Agenda by allowing citizen verification and scrutiny of SDG processes; to reform government processes and budget planning to be more evidence-based and results-oriented; and to establish national Covid-19 resiliency plan that leaves no one behind.

Building trust towards an enabling environment

Matt Simonds, CPDE Senior Policy and Liaison Officer, the last speaker, presented on the subject of Building Trust towards an Enabling Environment initiative, and on upholding the role of CSOs as development actors in their own rights.

“The SDGs themselves emphasise the need for inclusive partnerships and how government should engage with other actors, including but not limited to civil society,”, he argued. 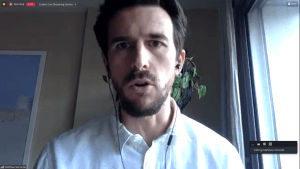 Several global agreements recognise civil society’s role in development, but these are too often not respected by the signing States at the country level. According to him, “CSOs are currently hampered in their ability to fulfill their mandate and achieve the SDGs”, especially at the local level.

He explained that “the disabling environment is unique to each country,” pointing to the “need to focus efforts towards enabling environment at the national level, and bring all stakeholders at the negotiation table to build trust and enable fruitful collaborations between these different actors.”

Matt Simonds responded by recalling the need to keep thinking and pushing for new enabling ways for civil society, from the local to international level: “The commitments at the global level are not translating into a reality of improved environment for civil society. We are trying to find solutions to reverse this trend.”

Global to Action against Poverty’s Ingo Ritz added that the purpose of the 2022 GPA is precisely to provide a space for CSOs to collaborate independently on these pressing issues. 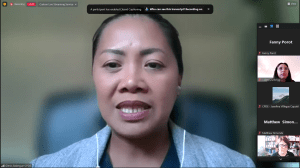 Glenis Balangue eventually wrapped up the session with an activists’ favorite: “They tried to bury us and they didn’t know we were seeds.’ “As sprouts, we civil society members, grassroot organisations, and peoples’ organisations will continue to collaborate and fight repression and demand justice, not only for civil and political rights but also for social, economic, and cultural rights,” she concluded.

You may watch the full event recording below: