The alarming disparity between the rich and the hungry is getting wider and wider by the day.

Amid the ongoing pandemic and its related global crises, almost a billion of the world’s population are suffering from severe hunger in 2020. More than two billion, on the other hand, did not have access to adequate food. The trend of global hunger and malnutrition is rising in the past years, but last year saw a staggering increase—equal to that of the previous five years’ figures combined. Along with this are the all-time high food prices in the past decade, which show no sign of abating. 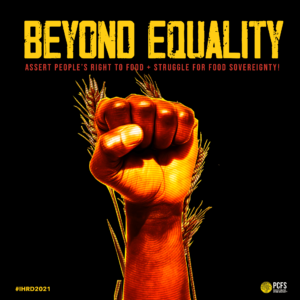 On the other hand, the world’s 2,365 billionaires boosted their wealth by 54% in the same year. Altogether, they earned USD 4 trillion in 2020—almost half of which is shared by the list’s top 20. The amount is way beyond what the world requires to end global hunger; a study estimated USD 330 billion is needed to eradicate hunger in the next decade, albeit solutions proposed work under the current neoliberal framework.

Unfortunately, the same billionaires are behind the “recovery” reforms forwarded in the major United Nations events held this year, which is no surprise following the 2019 strategic partnership UN signed with billionaire lobby organization World Economic Forum. We in the People’s Coalition on Food Sovereignty (PCFS) even initiated a sign-on statement to oppose this partnership.

UN made it a point to emphasize “inclusivity” in these events, including the UN Food Systems Summit and the COP 26. By giving attention to the participation of vulnerable and discriminated groups in society, these governments and their billionaire cohorts paint a picture of people’s cooperation notwithstanding their domination and dictate on the status quo.

In the same vein, the UN is commemorating this year’s Int’l Human Rights Day with the theme “All Human, All Equal: Rebuild Better, Fairer, Greener,” zeroing on equality. UN describes the Sustainable Development Goals as an “agenda for equality,” and it is no wonder that they’re reiterating this as they chase to meet the 2030 target.

However, this is nothing but lip service inclusivity—a sugarcoat to further monopolize our land and food systems, to preserve the global corporate food empire. People’s movements all over the world especially from the Global South refuted this pretentious inclusivity by organizing their own platforms to counter these events, such as the Global People’s Summit on Food Systems and the Southern People’s Action on COP 26.

The people will never be equal with those who hold power and ownership over our social structures and forces of production. Equality in the context of human rights including the right to food will never be realized unless violators are addressed. People’s inclusion can only do so much without holding accountable those who abuse their positions of power.

On International Human Rights Day, PCFS highlights the assertion of rural people’s movements for people’s rights, especially people’s food sovereignty as the realization of people’s right to food. Akin to this is demanding the accountability of governments and corporations that perpetuate human rights violations, which are often disregarded as a legitimate demand because of their influence over policy spaces.

We have witnessed governments greenlighting corporate landgrabs and resource plunder through development aggression projects, displacing rural communities and Indigenous Peoples from their ancestral domains. Thus, the fight for land rights by the multisectoral Our Land is Our Life coordination group in Africa against corporate capture.

The promotion of market-based reforms and techno-fixes to increase agricultural production have robbed smallholder farmers of their livelihoods. Such is the case of the Three Farm Laws in India, which was met with a year-long farmers’ protest that resulted in their pending repeal.

Repressive policies quell and even literally kill lawful dissent, while militarization—whether for proxy wars or domestic counter-insurgency—is often allocated with significant budget. We see this in Israel’s unlawful and unjust occupation of Palestine and the Philippine government’s record-high peasant killings, unlawful arrests and disappearances, and community bombings further enabled by the Anti-Terror Law.

PCFS will always be in solidarity with the rural people’s movements in Africa, India, Palestine, the Philippines, and the rest of the world that have persisted in the struggle for food sovereignty. We take this opportunity to support the call urging the International Criminal Court to move forward with its probe against the governments of Israel and the Philippines.

The fight for people’s rights and people’s right to food is integral to the struggle for just, equitable, healthy, and sustainable food systems. PCFS, continues to echo the call of the People’s Declaration by the Global People’s Summit on Food Systems and do our part in carrying out the Summit’s action plans.

Only through our fervent struggles can we beat the inequality gap and seize the power to change today’s unjust social relations toward transforming our food systems and achieving food sovereignty. ###