From the 2020 DAC CSO Dialogue: Advancing the effectiveness agenda and working together amid a global pandemic 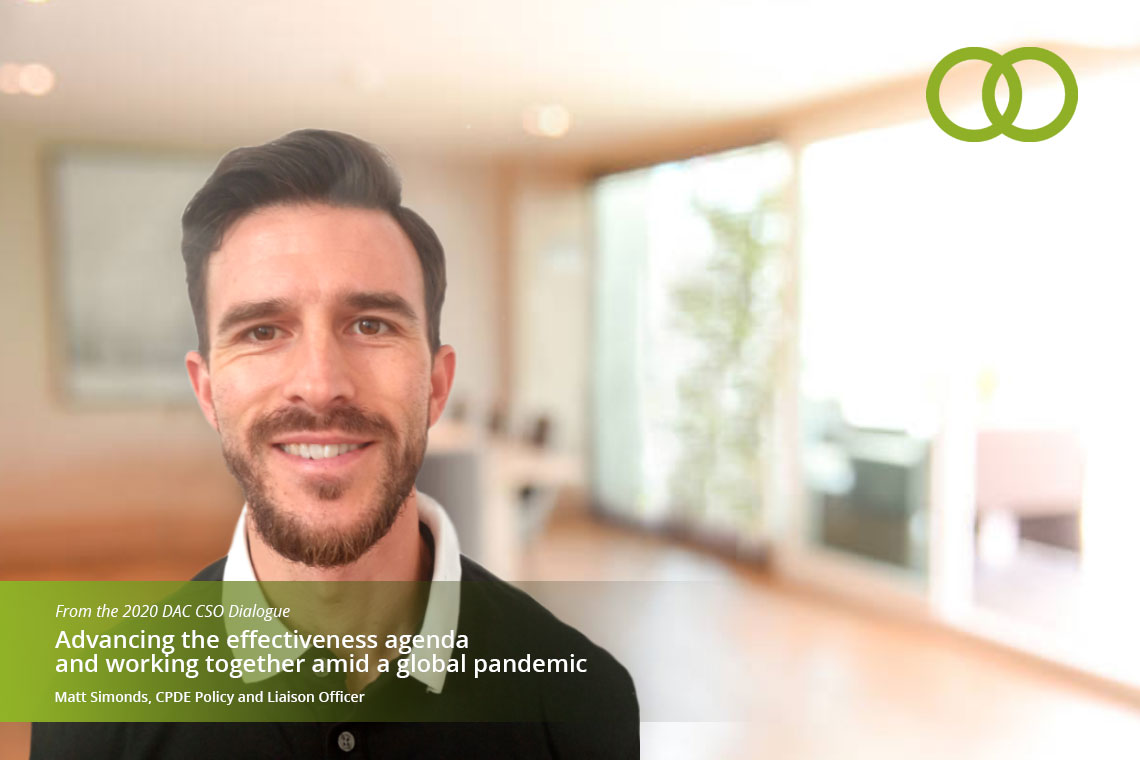 The month of June opened with the 2020 DAC CSO Dialogue, the third installment of the annual meeting between CSOs and the Organisation of Economic Cooperation and Development’s Development Assistance Committee (OECD DAC). It brought together 30 civil society representatives from all over the world and a roughly similar number of DAC delegates, including the DAC Chair, Susanna Moorehead, and the Development Cooperation Directorate Director, Jorge Moreira da Silva.

CPDE was well-represented among the participating CSOs, with members from both the South and North and across the different CPDE regions and constituencies present and involved in the discussions.

Originally, the dialogue was slated to take place in Paris in April but was postponed due to the COVID-19 pandemic, and eventually had to take the form of a virtual meeting. The agenda covered a range of priorities, from effective development cooperation to how DAC donors support CSOs. Over time, the dialogues have continued to improve as the DAC Community and members of the DAC CSO Reference Group developed a more familiar rapport and build on and learn from the previous meetings.

There were a number of highlights from the event, first of which is there are several common priority areas between the DAC Community and CSOs. The common agenda is very encouraging and grounds for continued engagement in the future.

An important theme for CPDE addressed during the dialogue was the DAC’s role in advancing the effectiveness agenda. CPDE spoke on behalf of the reference group to emphasise the importance of effective development cooperation, especially in the current context of a global pandemic.

In addition to highlighting the role for effectiveness in light of COVID-19, the reference group emphasised the need for the DAC to accelerate progress on its effectiveness commitments and the importance of a robust global monitoring framework to do so. In response, the DAC informed the dialogue that some initiatives are underway to elevate the profile of the effectiveness agenda in the DAC’s work on both the political and technical fronts. As civil society, it will be important to reinforce DAC members on the issue, to ensure that they enjoy the kind of political support needed to make effectiveness a top priority in the DAC work.

Another important theme covered during the dialogue involved the content of the recent study on How DAC Members work with Civil Society. The reference group brought some top-line reflections and feedback on the study to the dialogue, much of which was in support of its findings and recommendations.

Several other topics discussed over the course of the dialogue include the need for donors to maintain and even increase ODA levels in light of the current crisis, the role for the private sector in development, climate finance, peace and security, gender and preventing sexual exploitation, abuse and harassment, DAC reform, debt relief, and how the COVID-19 crisis is impacting CSOs.

Some discussion also arose on the role of CSOs pushing for non-DAC donors to uphold some of the same principles and commitments we expect of the DAC. The reference group reassured the dialogue that CSOs try to hold non-DAC governments to account, which can be evidenced, in its starkest form, by how CSO space is being infringed upon in many countries as a direct result.

Overall, the event was marked by active participation from both sides of the conversation. It is clear, however, that an annual three-hour meeting is not enough to accommodate the type of rich and meaningful discussions that would benefit both the DAC and civil society. Suggestions during the dialogue to have more specific and ongoing thematic discussions to allow for a more sustained and comprehensive engagement between CSOs and the DAC Community were then most welcome in this respect.#

[1] – Recommendations: OECD legal instruments which are not legally binding but practice accords them great moral force as representing the political will of Adherents. There is an expectation that Adherents will do their utmost to fully implement a Recommendation. Thus, Members which do not intend to do so usually abstain when a Recommendation is adopted, although this is not required in legal terms.