Last October, the People’s Coalition on Food Sovereignty (PCFS), a global network of small food producers and food sovereignty advocates from the grassroots participated in the annual Forum of the Civil Society Mechanism (CSM) 1 for relations with the United Nations Committee on World Food Security (CFS), held at the Food and Agriculture Organization (FAO) headquarters in Rome, Italy. Noreen Maagma of the Global Secretariat represented PCFS.

From October 10 to 12, the CSM Coordination Committee (CC) members convened to discusse the political situation of the CFS, the CSM evaluation report, the 2019 strategy of the CSM with focus on the priorities, and the CSM’s position in the CFS plenary 45th plenary session on October 15 to 19.

PCFS joined the Asia group during the CSM annual forum on October 13 to 14, and met with state representatives of China, Philippines, and Thailand. The Coalition asserted that the rural peoples’ right to live can only be achieved if their right to land is guaranteed, ensuring their access to land and its cultivation.

They pointed to the adverse impacts of the International Monetary Fund-World Bank Group (IMF-WBG) policies to peoples’ lives, in a campaign that coincided with the IMFWBG annual meeting and its counterpart People’s Global Conference in Bali, Indonesia. PCFS also called on governments from Asia to conduct a similar dialogue at the country -level, which was echoed by other CSM representatives.

The Coalition also co-organized the “Defend the Defenders: How to effectively protect those who fight for the right to food?” It was one of the CSM side events at the CFS 45, held October 17. Delegates from Cameroon, Kenya, Palestine, and Southeast Asia – represented by PCFS’s Maagma – shared their testimonies. Maagma presented the cases of land grabbing in Cambodia, Philippines, and Indonesia and discussed how the rights of rural peoples including farmers and indigenous peoples are being violated. The presentation highlighted how massive land and resource grabbing has intensified for monocrop plantations and mining, and rural communities asserting their rights are met with state-sponsored violence and repression. 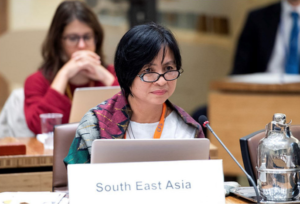 PCFS also submitted to UN Special Rapporteur on the Right to Food Hilal Elver and FAO Director General Jose Graziano Da Silva the findings of two International Fact-Finding Missions the Coalition co-organized this year: on the spike of human rights violation in Mindanao, southern Philippines due to the implementation of Martial Law, held April; and on the land grabbing of Chinese company Hengfu in Preah Vihear province, Cambodia, held September. The UN officials were invited to look into these developments and intervene by urging the governments of the Philippines and Cambodia to abide by national laws and international covenants regarding the rights of the affected communities. #

1 The Civil Society Mechanism (CSM) for relations with the United Nations Committee on World Food Security (CFS) is the largest international space of CSOs working to eradicate food insecurity and malnutrition. The CSM was founded in 2010, an autonomous part of the reformed CFS. The purpose of the CSM is to facilitate civil society participation and articulation into the policy processes of the CFS.