Following Jair Bolsonaro’s election as Brazilian president, global network of Indigenous Peoples (IP) organizations International Indigenous Peoples Movement for Self-Determination and Liberation (IPMSDL) expressed fears that his government is a ‘threat’ to the lives and rights of IP in the country.

The concern is founded on the new president’s bold pronouncements regarding boosting the economy by opening up protected areas in the Amazon, giving way to mining and oil projects that have been linked to the spate of killings in the region.

“We fear for the lives and safety of our indigenous leaders and communities in Brazil with a government that has very little regard to the right to self-determination of the Indigenous Peoples. With the kind of declarations he has been proudly circulating, he already exposed himself as a collaborator of mining corporations and corporate businesses drooling to plunder the rich ancestral lands and protected rainforest of the Amazons,” said Beverly Sakongan Longid, Global Coordinator of IPMSDL.

The Global Witness report tags Brazil as the most dangerous place in the world for environmental, land, and indigenous activists, with 57 killings recorded in 2017. Of this number, around 80% were targeted in the context of their efforts to protect the natural riches of the Amazon. 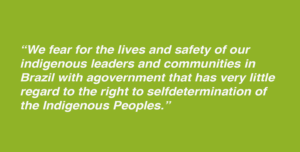 “Bolsonaro may have been deaf or blind to the alarming news that Brazil has been one of the most dangerous places for IP defenders as land-related conflicts continue to erupt. But what is more appalling is how he, as a former army captain, unpretentiously praise the grim military dictatorship era that has displaced, killed, and tortured thousands of Indians in the Amazon,” she added.

During his campaign, Bolsonaro stated that “not one centimeter of land will be demarcated for indigenous reserves or quilombolas (descendants of African slaves)”, giving way to mining. He is also keen on opening hydroelectric dams in the water reserves and roads cutting across the Amazon. To fast-track the licensing of plantation and extractive businesses, Bolsonaro also pledged to combine the country’s oversight and environment watchdog Environment Ministry with the Agriculture Ministry, which is heavily controlled by his allies in the agribusiness sector.

“Everything could be in danger－the hard-earned victories of indigenous leaders against illegal loggers, the hopes built around environment protection in the Escazu Agreement, the prime role of the Amazon in battling climate change, and the culture and very existence of Indigenous Peoples and their children,” Longid further explained. At the same time, Longid says, “Although the threats are looming, the global solidarity of indigenous peoples movements whether in Brazil, in the whole of Latin America, Africa, and Asia will continue to grow and advance to assert our rights.”#