Paris, FRANCE– The Global Partnership for Effective Development Cooperation (GPEDC) hosted a workshop in Paris, France on 11-12 September 2018.  The event titled ‘Reinvigorating Effectiveness for the 2030 Agenda’ brought together the different constituencies of the GPEDC to share experiences and exchange ideas on how to assess the implementation of the effectiveness agenda at the national level. It also served as an unofficial launch of the Third Monitoring Round (3MR).  The GPEDC monitoring framework remains a cornerstone of GPEDC’s work and its contribution to the international development community, making this meeting an important opportunity for CPDE to interact with the different constituencies.

CPDE sent a delegation which included three co-chairs and members from Africa, Asia, Europe and Latin America. Members of the Global Secretariat also attended to coordinate the delegation.

The CPDE sought to present issues and messages on (a) upholding enabling environment for CSO participation for the 3MR; (b) primacy of private sector engagement in development cooperation; and (c) fulfilment of EDC commitments.

CPDE members were included as panellists throughout the official sessions and were also able to engage in the interactive dialogues.[1]Notably, CPDE co-chairs Vitalice Meja and Beverly Longid were panellists across three sessions. 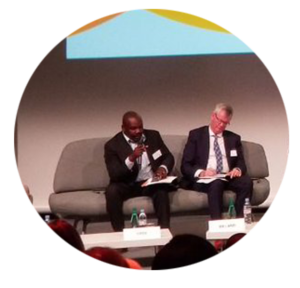 Meja was part of a panel on how donors engage the effectiveness agenda in their own aid/development cooperation strategies. During the discussion,some donors have suggested that the effectiveness agenda is still a top priority while others were more cynical about commitment to the agenda given the lack of progress on long standing commitments. Meja raised the issue of donors falling short on their commitments and asserted the importance of having more political will to meet the unfinished business.  He also highlighted the critical role of civil society across all aspects of the agenda, not only in the monitoring.

Beverly represented CSOs in two sessions. The first session offered an opportunity for countries to share how participation in past monitoring rounds have resulted into concrete actions, including the establishment of national development co-operation policies and strengthening of multi-stakeholder coordination mechanisms. Beverly emphasised certain experiences where genuine partnerships with civil society have had positive impacts at the national level, citing the peacebuilding process in Colombia as an example. However, CSOs face difficulties in participating fully and meaningfully at national policy arenas. Globally, CSO workers face crackdowns and curtailment of their basic freedoms and human rights. CPDE take note of a global wave of shrinking civic spaces which include both legal and regulatory and extrajudicial impediments, including cases of intimidation and challenges to CSO operations and financing. 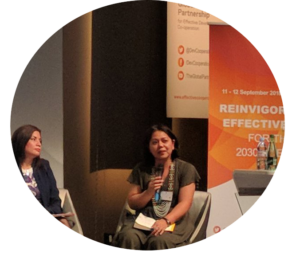 The second session where Beverly spoke aimed to solicit different perspectives from stakeholders on the role of private sector in development and to effectively engage the private sector with development cooperation. Beverly, an indigenous peoples rights activist, emphasised that from the perspective of indigenous communities, free prior and informed consent is a minimum requirement for private sector to operate in the country. Based on their experience in the Cordillera, Philippines, projects funded by multinational corporations and donor agencies, in connivance with the State, result into community displacements and violations of their indigenous rights. Early this year, the Philippine government was trying to revive a donor-funded energy project in the Cordillera which was successfully halted through community resistance three decades ago. Beverly added that the framework of multi-stakeholder partnerships is also being used to reach out to the private sector at the detriment of genuine people’s participation.

All GPEDC constituencies were represented in the Paris meeting. However, there were notable absences on the part of the governments and GPEDC co-chairs Bangladesh and Uganda.  Nevertheless, the meeting proved to be a worthwhile opportunity for CPDE to engage and interact with the international development cooperation community.