Is development cooperation doing enough for the youth? 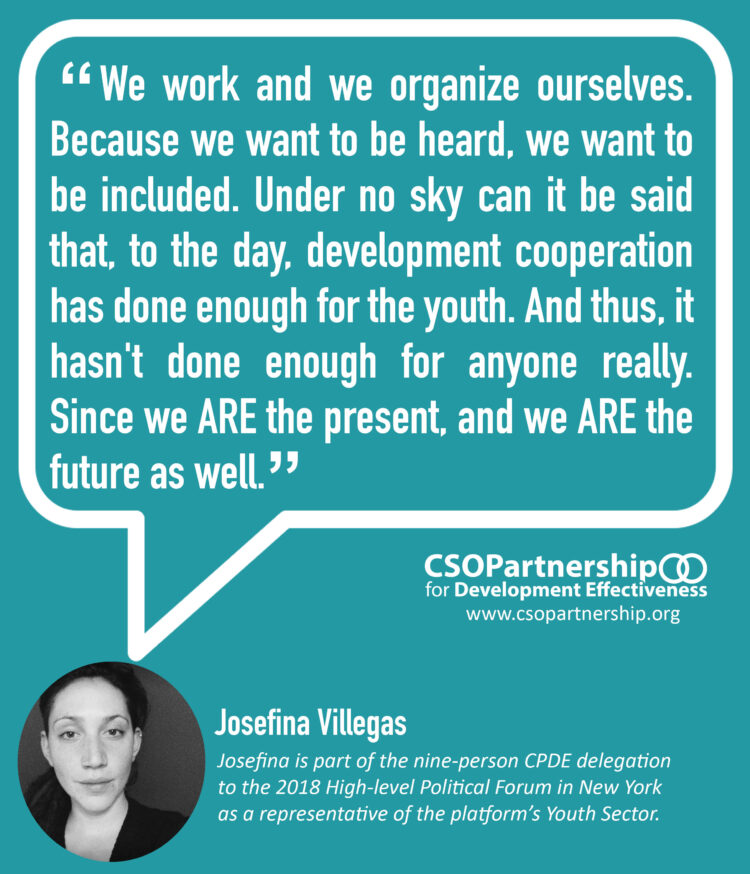 Josefina is part of the nine-person CPDE delegation to the 2018 High-level Political Forum in New York as a representative of the platform’s Youth Sector.

Agenda 2030 was established as an ambitious roadmap on how to pull together development actors’ efforts toward an ambitious idea of development, one we have only and so far discussed about, but which requires enormous amounts of work and will to actually become a reality. By reality, we wish to see concrete material living conditions and situations, measurable in terms of inclusion, sustainability, community development and respect for human rights.

This is not reality unfortunately for majority of the 1.1 billion youth aged 15 to 24 where 85 per cent live in developing countries, and from which, an 89.5 per cent growth is projected by 2025. If we look into broader definitions which contemplate young adults (aged up to 30-35) as being affected by the same development issues, we are facing the largest young generation humanity has ever seen.

Poverty, wars and conflict obscure meaningful participation. Millions of youth have become asylum seekers or refugees, migrant workers, or victims of trafficking. Many are rootless, with their communities being affected by climate change consequences. Most youth face concrete unemployment or underemployment constraints. Access to education is limited, as well as access to sexual and health policies. For many of us, a lack of State and public policy implies our development opportunities are cut down to not much more than labour exploitation and/or  drug business and consumption.

We are all aware these are not isolated realities. It is the current global development model — the one whose wheels seem to have gotten stuck in the mud for decades now — a system which does not redistribute opportunities, which lives off permanent consumption, debt and financial speculation, and natural resources overexploitation.

The only way to materialize a new idea of development is to modify our current development practices.

In CPDE, we work towards this goal by applying development effectiveness principles in our projects and partnerships. In the larger context, how development is financed is the main issue and that is why we advocate both for increased quantity and quality of development cooperation to finance the SDGs. We think that more aid for the youth in developing countries is important in as much as established accountability mechanisms in financing for development, especially in public private partnerships

Youth around the world have much to say and share on how we imagine development in the near future. We actually work on a daily basis to address these issues. We work and we organize ourselves. Because we want to be heard, we want to be included. Under no sky can it be said that, to the day, development cooperation has done enough for the youth. And thus, it hasn’t done enough for anyone really. Since we ARE the present, and we ARE the future as well.

From this platform which is CPDE, our main claim is for the design and implementation of a youth indicator on youth participation in development projects, processes, discussions and agenda 2030. There is hope from the youth that the youth indicator is realised through governments fulfilling their commitment to include youth as independent actors in developing this initiative, providing financial resources to programs and projects developed by youth geared towards the youth indicator, and upholding accountability, and  a human rights based approach to development.

10 Days of Action on Human Rights and Shrinking Civic Space 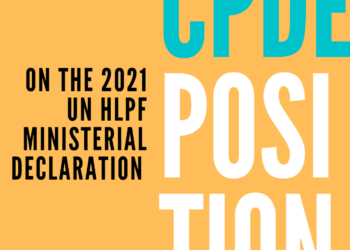 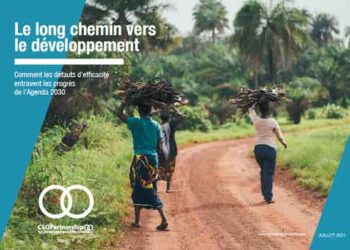