Issues of non-inclusion of CPDE representatives in certain country consultations have been raised by CPDE members in the roll out of the pilot studies. Meanwhile, CPDE received broad support from SC members after presenting its proposed Global Action Plan (GAP) during the15th Steering Committee (SC) Meeting of the Global Partnership for Effective Development Cooperation (GPEDC) last 21-22 April 2018 in Washington DC.

The proposal was seen by SC members as a way to address the unfinished business from Paris to now and was considered as GPEDC’s core value.  The body clarified that the GAP would not introduce new commitments nor would it create a parallel monitoring process to the regular monitoring underway

On the strategic output on “Knowledge-sharing”, the concept note for the Knowledge Sharing Platform was endorsed and the online visualisation of the monitoring data was launched during the meeting. The GPEDC Joint Support Team  will be conducting webinars on the data visualisation platform and CPDE can request one specifically for our constituency if it is of interest.

The composition of the Business Leader Caucus was endorsed as a main proposal under the strategic output on “Effective Private Sector Engagement”.

On the strategic output on “Learning from different modalities”,  there was a discussion on organising a specialised policy dialogue on one of three themes: 1) engaging private sector; 2) triangular cooperation; and, 3) assessing impact of non-traditional flows. CPDE supported to have the dialogue on the third theme.  However, there was hardly any discernible consensus on which theme will be chosen.

CPDE emphasised the need to do internal outreach in order to get GPEDC constituencies to be more active, in addition to the external outreach as part of strategic output on “Driving political momentum: strengthening engagement”. The Global Outreach and Advocacy Strategy was presented and focused primarily on notable events and moments where the GPEDC could potentially boost its visibility.

CPDE’s proposed creation of a NECC in GPEDC’s governance body as an embodiment of the multistakeholder character of the Partnership has not been adopted. While the proposal had strong support from Germany, Canada, Pacific Islands, and the EC, objection came from the Philippines and Bangladesh. Mexico came in as indifferent but tried to move the discussion forward.

The item will be part of the agenda for the next SC meeting in October. 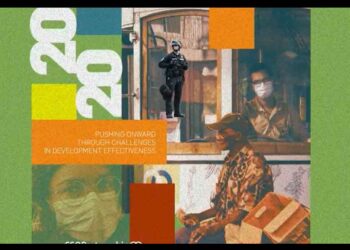 CPDE Report to the Public 2020 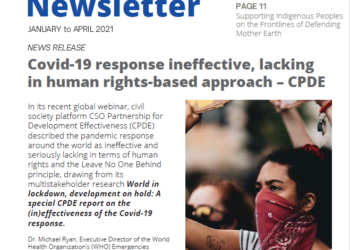