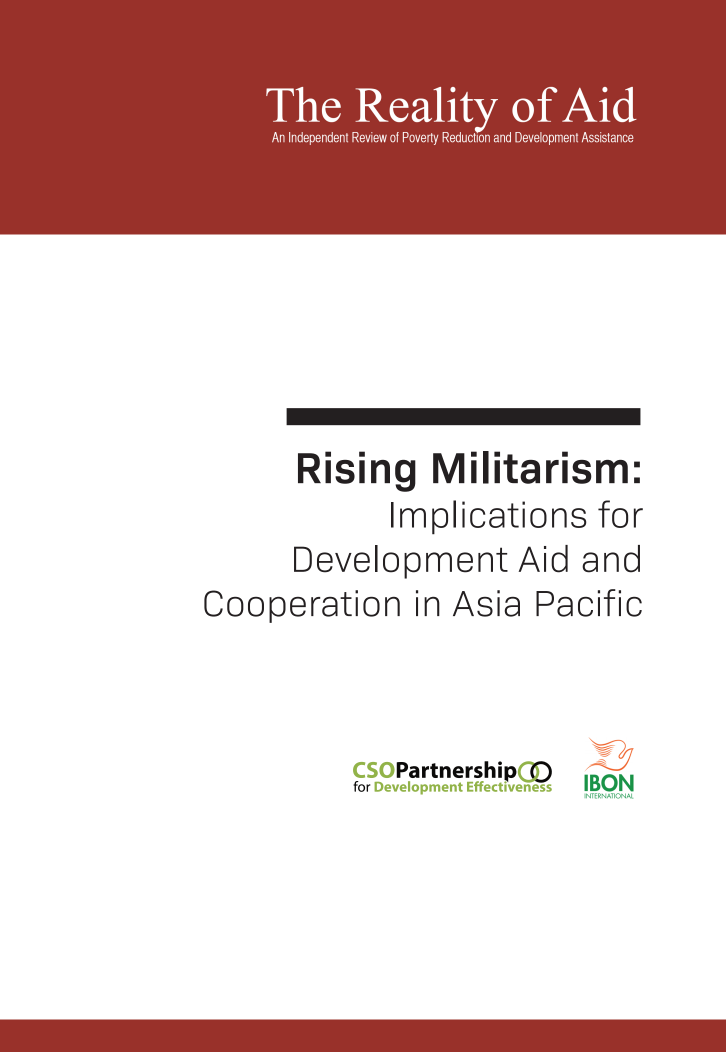 A policy research jointly published by the Reality of Aid- Asia Pacific and CPDE has been released to consolidate information on current trends and issues relating to militarism and development cooperation as well as bilateral and multilateral efforts in conflict and post-conflict situations in the Asia Pacific region.

The research entitled, “Rising Militarism: Implications for Development Aid and Cooperation in Asia Pacific” shows how official development assistance (ODA) as a historical contribution of donor-countries to poverty eradication in many developing countries are being diverted to resolve their own conflict and promote security interests, further undermining the humanitarian and democratic interests of people in conflict and fragile situations.

In Asia Pacific, many of ODA-receiving countries are also directly confronting fragility, conflict, and rampant militarism. It also shares large part of militarism and spending in the world.

Militarism refers to increasing military influence over civilian and foreign affairs of government involving high military expenditures and aggression as a means for global powers to protect their economic and political interests. Militarism is an impediment to the achievement of the sustainable development goals (SDGs), in particular the goal on achieving peace and just societies. It remains a major cause of worldwide poverty, loss of lives, homes, and livelihood, destruction of communities, biodiversity and the environment, and climate change.

Militarism is evident in weapon and military aid, as it is in counterinsurgency wars, and military agreements. The US, alone, has military bases and agreements in 70 countries, most of which are strategically located in Asia Pacific. It has also found its way to development cooperation through bilateral and military aid, often in the guise of development projects, anti-terrorism programs, and mutual defense agreements. Developed countries have also started redefining ODA to include spending on peace and security, but at the detriment of people’s lives and rights.

The research also demonstrates the great need and opportunity for CSOs to build and strengthen its advocacy strategy around the issue.